Maruti Suzuki and Hyundai have so far dominated the CNG space in India, with Tata Motors being the newest entrant.

With a lack of small-capacity diesel engines in much of the budget segments and sky-high fuel prices, CNG is becoming the new fuel of choice. Maruti has long dominated the CNG market with a wide range of CNG powered models, with Hyundai and Tata too vying for a piece of the pie.

CNG vehicles do command a premium over their petrol counterparts, but have significantly lesser running costs, making it very viable for use in the city. So, here’s a list of all CNG vehicles currently on sale in India, ranked from the least to the most fuel-efficient, offering a cheaper and cleaner alternative to petrol and diesel.

Starting with the Maruti Suzuki Eeco, which returns a fuel economy of 20.88km/kg, it is the only van on sale with a factory-fitted CNG kit. While the Eeco is available in both 5- and 7-seater configurations, the CNG kit is only offered on the 5-seater variants that come with air-conditioning as standard. The Eeco is targeted towards both private and commercial buyers, with the latter using it for cargo duties or as commercial fleet cars.

The Eeco is powered by a 1.2-litre engine mated to a 5-speed manual transmission. In CNG-spec, this engine produces 62hp and 85Nm , while  in petrol-spec, it produces 72hp and 98Nm of peak torque. The CNG-powered Eeco is priced at Rs 5.88 lakh. 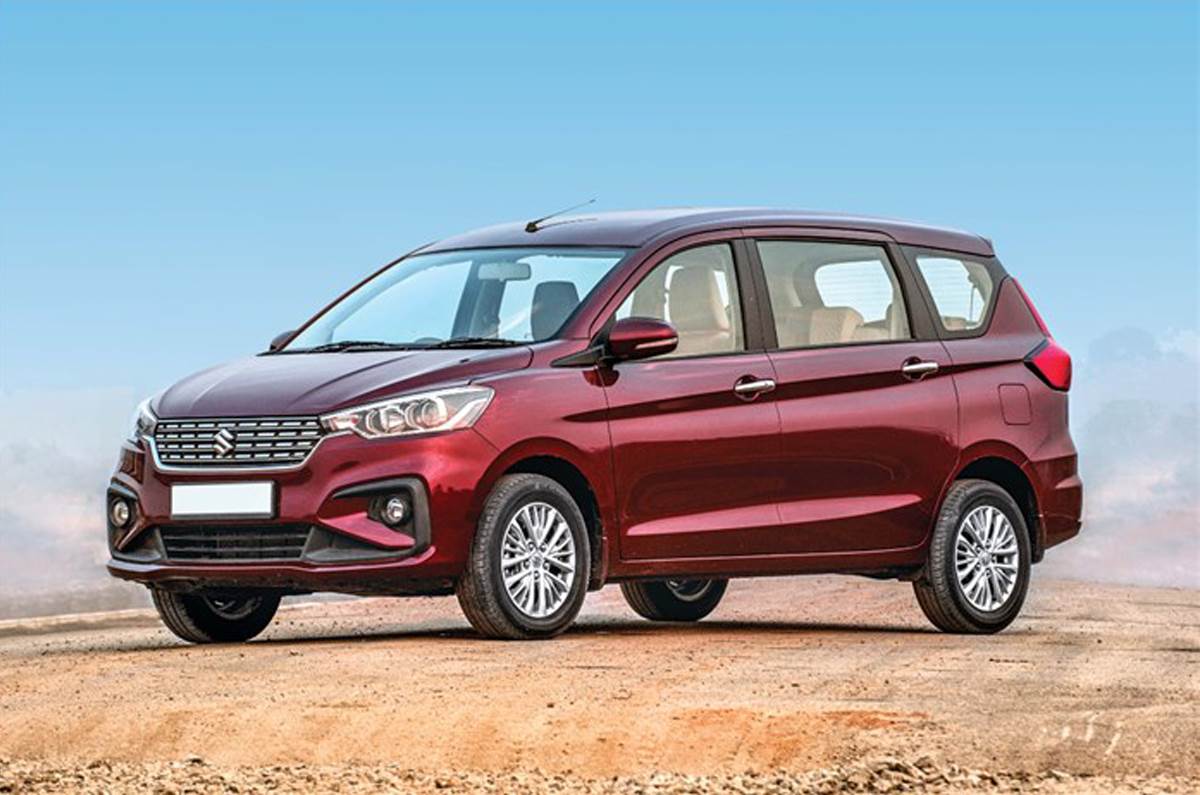 The Maruti Suzuki Ertiga is the only large vehicle outside of compact sedans and hatchbacks to be offered with a factory-fitted CNG kit. Likewise, it is also the only CNG-powered 7-seater MPV on sale in India. It’s powered by Maruti Suzuki’s K15B, 1.5-litre four-cylinder engine that produces 92hp and 122Nm of torque when running on CNG – down 13hp and 16Nm from its petrol-powered counterpart.

In fact, this engine is also likely to be offered on the upcoming Brezza CNG. Maruti Suzuki claims a fuel economy of 26.08km/kg for the Ertiga CNG, with the CNG kit only available on the second-from-base VXi trim. Priced at Rs 9.87 lakh, it costs Rs 95,000 more than its corresponding petrol trim. 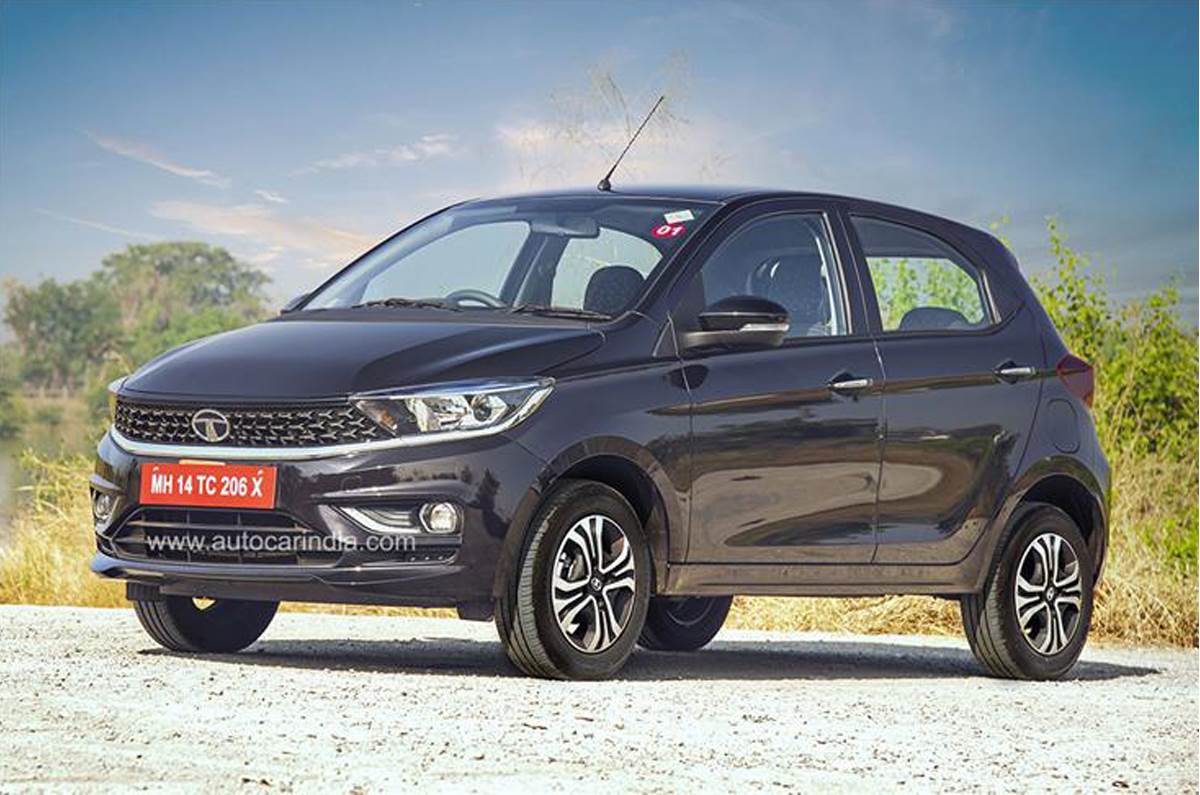 The Tiago CNG is the first from Tata’s new range of cars to be meted out the CNG treatment. Powered by the same 1.2-litre, three-cylinder Revotron engine, the CNG-powered Tiago produces 73hp and 95Nm of torque, down by 13hp and 18Nm from its petrol-powered counterpart. However, the Tiago is still the most powerful CNG car in its segment. Prices for the Tiago CNG range between Rs 6.09 lakh- 7.52 lakh, costing Rs 90,000 more than equivalent petrol trims. Tata claims a fuel economy of 26.49km/kg for the Tiago CNG, which is admittedly some way off its rivals.

However, unlike other carmakers who offer CNG kits only on the base or mid-spec trims, Tata is offering the CNG kit on all trims of the Tiago – right from the base XE to the top-spec XZ+ trim. This means top-spec versions come fully loaded with features like projector headlamps with LED Daytime Running Lamps, a 7.0-inch touchscreen infotainment system with Android Auto and Apple CarPlay, eight-speaker Harman audio system, a digital instrument cluster, automatic climate control and more. Tata hopes, with this strategy, they can achieve “premium-isation of CNG” in India. 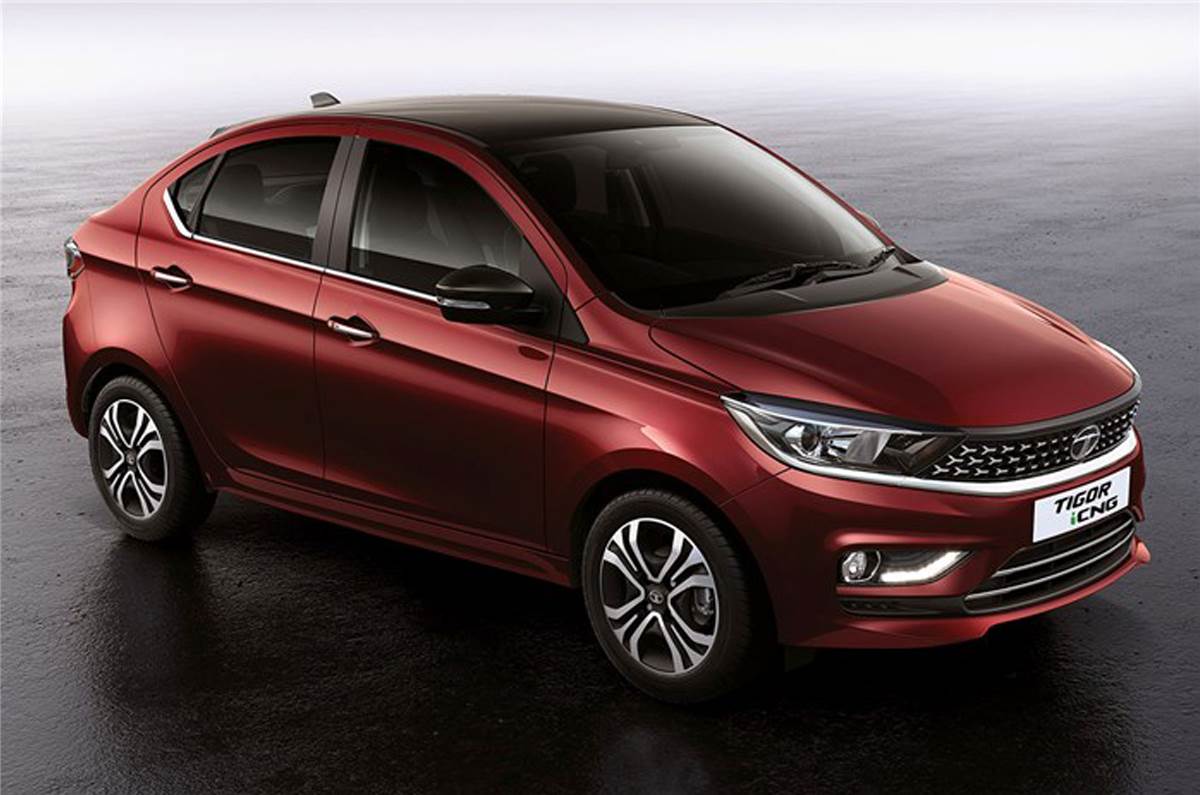 As for the trims, Tata offers the CNG kit only on the top-spec XZ and XZ+ trims of the Tigor. In fact, the Tigor CNG, in its XZ+ trim, additionally comes equipped with features such as rain-sensing wipers and automatic headlamps that aren’t offered on any other CNG car currently on sale in the country. Prices for the Tigor CNG range between Rs 7.69 lakh-8.29 lakh, costing Rs 90,000 more than equivalent petrol trims. Until the arrival of the Tata Tigor CNG, the Hyundai Aura was the only CNG-powered compact sedan on sale in the country. Under the hood, the Aura CNG gets the same 1.2-litre, four-cylinder engine from the standard model, which produces 69hp and 95.2Nm of torque in CNG. These figures are 14hp and 19Nm lower than what the unit makes in petrol mode. The CNG versions are only offered with a 5-speed manual gearbox.

Hyundai claims a fuel economy of 28.4km/kg for the Aura CNG, which is only marginally lesser than the Nios CNG. It’s solely offered on the second-from-base S trim, which is not as well equipped as its hatchback sibling. The Aura CNG is priced at Rs 7.74 lakh, costing Rs 95,000 more than the equivalent petrol trim. The Grand i10 Nios, the hatchback sibling of the Hyundai Aura, is one of the more premium and feature-equipped CNG cars you can currently buy. Hyundai offers the CNG kit on the Nios in the mid-spec Magna and Sportz trims, and, as such, it comes equipped with features such as an 8.0-inch touchscreen infotainment system with Android Auto and Apple CarPlay, automatic AC, projector fog lamps and a reverse parking camera. With most of Maruti Suzuki’s CNG models being offered on the base trims, they miss out on such feel-good features.

The Grand i10 Nios is powered by the same 1.2-litre, four-cylinder engine as on the Aura CNG, and produces an identical 69hp and 95.2Nm of torque. The engine comes paired to a 5-speed manual gearbox and has a claimed fuel economy of 28.5km/kg. Prices for the Grand i10 Nios CNG range between Rs 7.07 lakh-7.60 lakh. 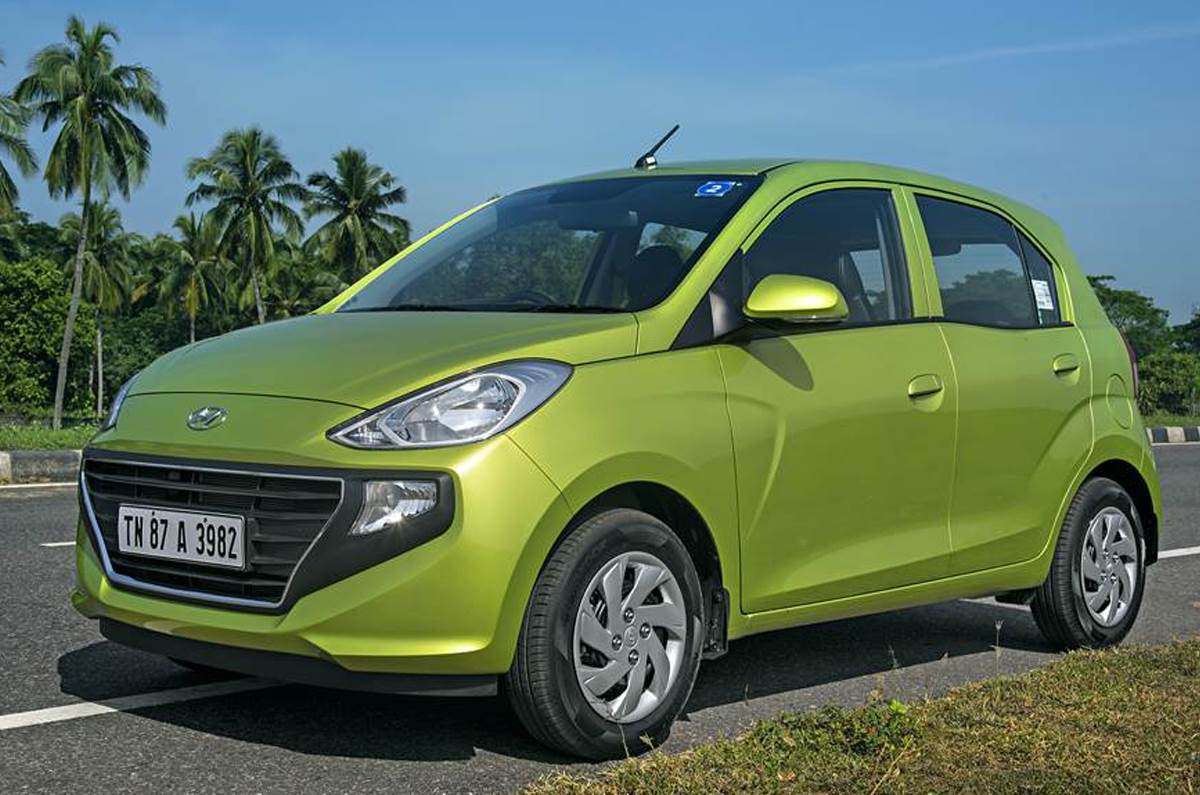 The Santro is the most affordable and also the most efficient in Hyundai’s line-up of CNG cars. It is powered by a 1.1-litre engine that produces 60hp and 85.3Nm of peak torque in CNG-spec. Compared to its rivals such as the Celerio CNG and the Tiago CNG that are powered by three-cylinder engines, the 1.1-litre engine on the Santro is a four-cylinder unit and also has the power and torque advantage over the former.

Hyundai claims a mileage of 30.48km/kg for the Santro CNG, making it among the top 5 cars to offer a fuel economy of over 30km/kg. It is available in the mid-spec Magna and Sportz variants, with prices ranging between Rs 6.09 lakh- 6.38 lakh, costing about Rs 69,000-76,000 more than their equivalent petrol variants. 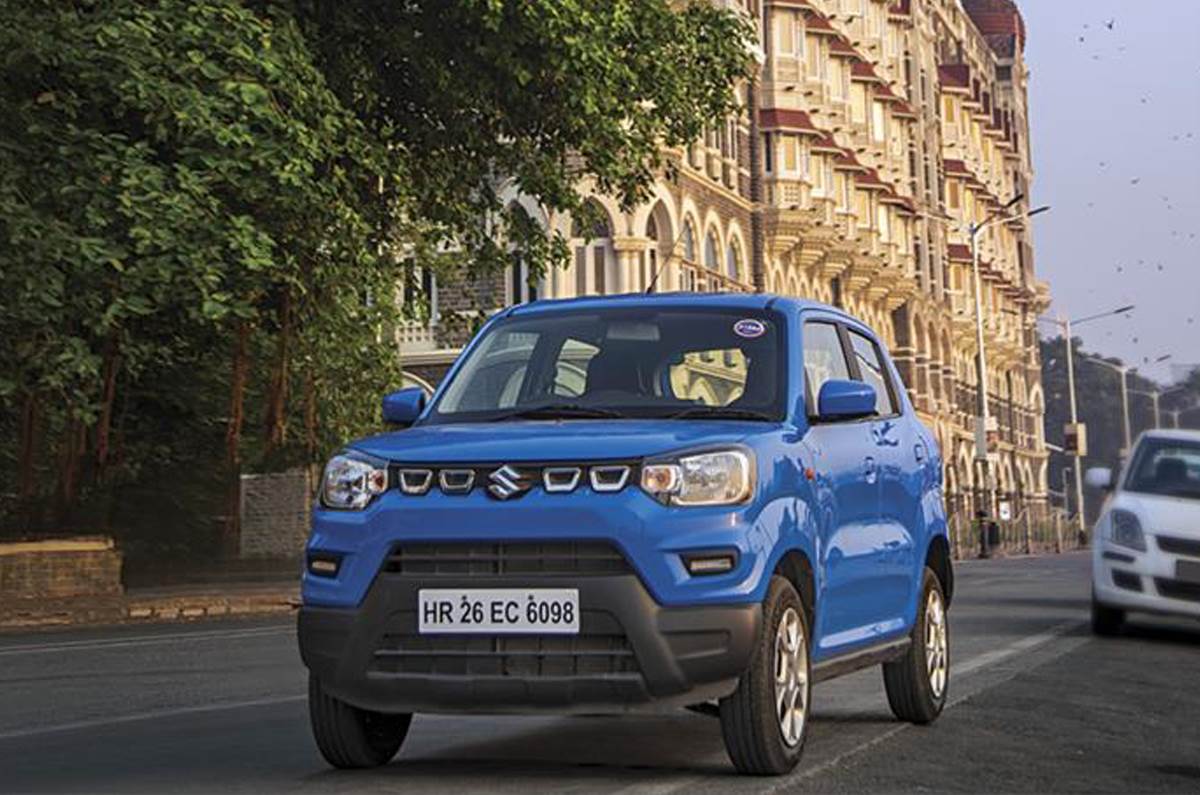 The CNG version of the Maruti Suzuki S-Presso is powered by the 1.0-litre K10B engine that comes mated to a 5-speed manual gearbox. Power and torque figures on the CNG-powered S-Presso are rated at 58hp and 78Nm and the S-Presso CNG returns a claimed fuel economy of 31.2km/kg. The same engine, in identical spec, is also offered on the WagonR CNG, although the fuel efficiency for the latter is marginally better than the S-Presso.

As compared to the petrol-powered S-Presso, power and torque figures are down by 9hp and 12Nm on the CNG-powered S-Presso. Contrary to other Maruti Suzuki models, the company offers the CNG kit on the mid-spec LXi, LXi (O), VXi and VXi(O) trims of the S-Presso. Prices for the S-Presso CNG currently range between Rs 5.24 lakh- 5.56 lakh. 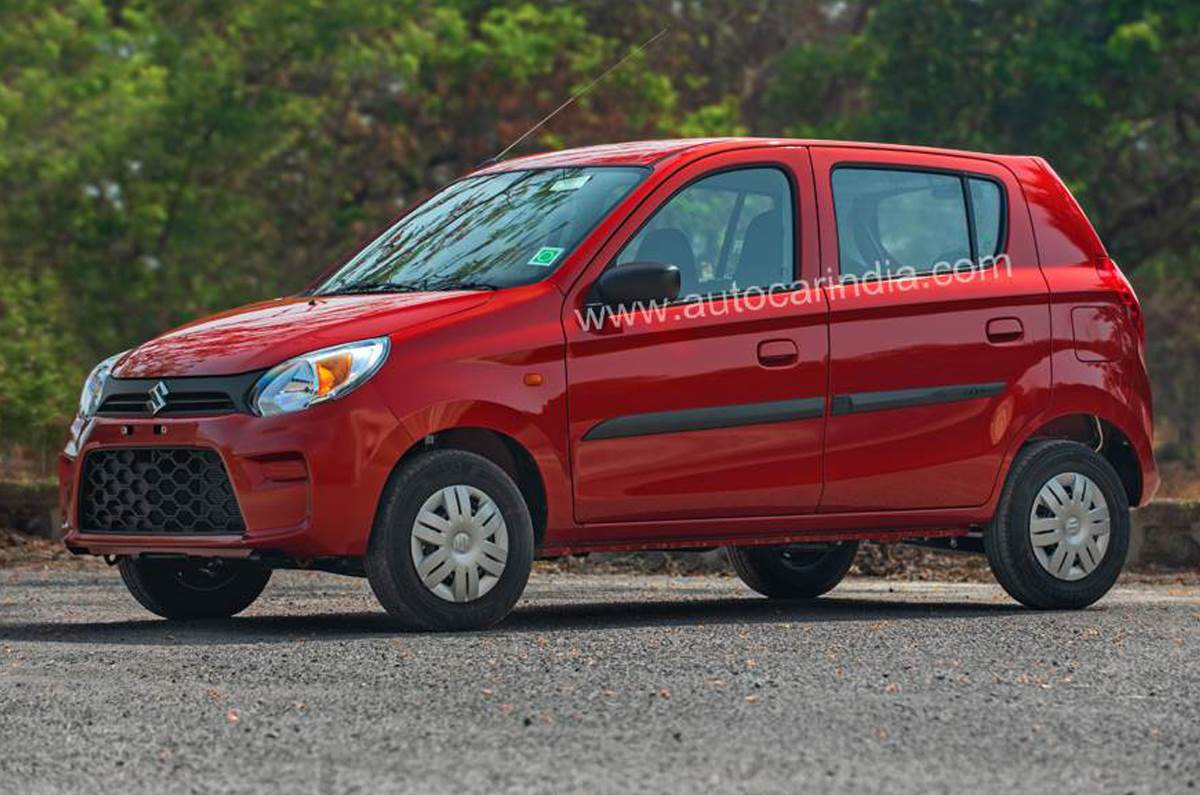 The Alto is available with a sole 796cc, three-cylinder engine and, in CNG-spec, it produces 40hp and 60Nm of peak torque. That’s down by 7hp and 9Nm from the petrol-powered Alto. Transmission option includes a 5-speed manual gearbox. The Alto 800 may be the least powerful CNG-powered vehicle in the country, but it is also, currently, the most affordable with its price ranging between Rs 4.89 lakh-4.95 lakh.

The Alto 800 CNG is offered on the second-from-base LXi and LXi (O) trims, with a premium of Rs 95,000 over the petrol models. Maruti Suzuki claims a fuel efficiency of 31.59km/kg, making it the third most fuel-efficient CNG-powered vehicle in the country. 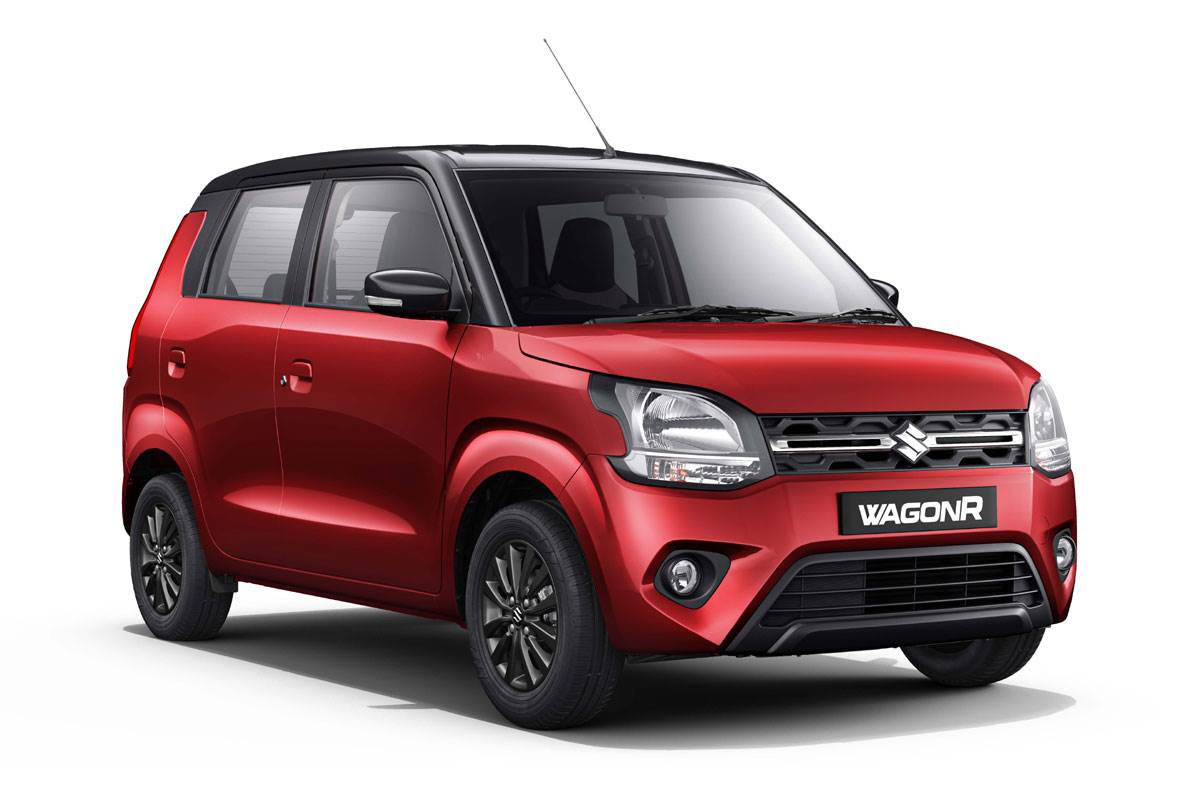 The most recent update to the Wagon R has brought with it some equipment updates and, more importantly, even more fuel efficient engines. Both 1.0-litre and 1.2-litre petrols are now from Maruti’s new DualJet family, though, like before, CNG buyers only get the factory fitted kit with the 1.0-litre mill. Maruti now claims that the Wagon R CNG returns a claimed 34.05km/kg – up from 32.52km/kg.

The new dual-fuel engine is also marginally down on power – developing 65hp in petrol mode (down by 3hp) and 57hp in CNG mode (down by 2hp).

While previously limited to just the base LXi and LXi(O) trims, the Wagon R CNG can now also be had in a mid-spec VXi variant, adding in more kit for the premium pricing. Prices for the Wagon R CNG currently range between Rs 6.35 lakh-6.81 lakh. 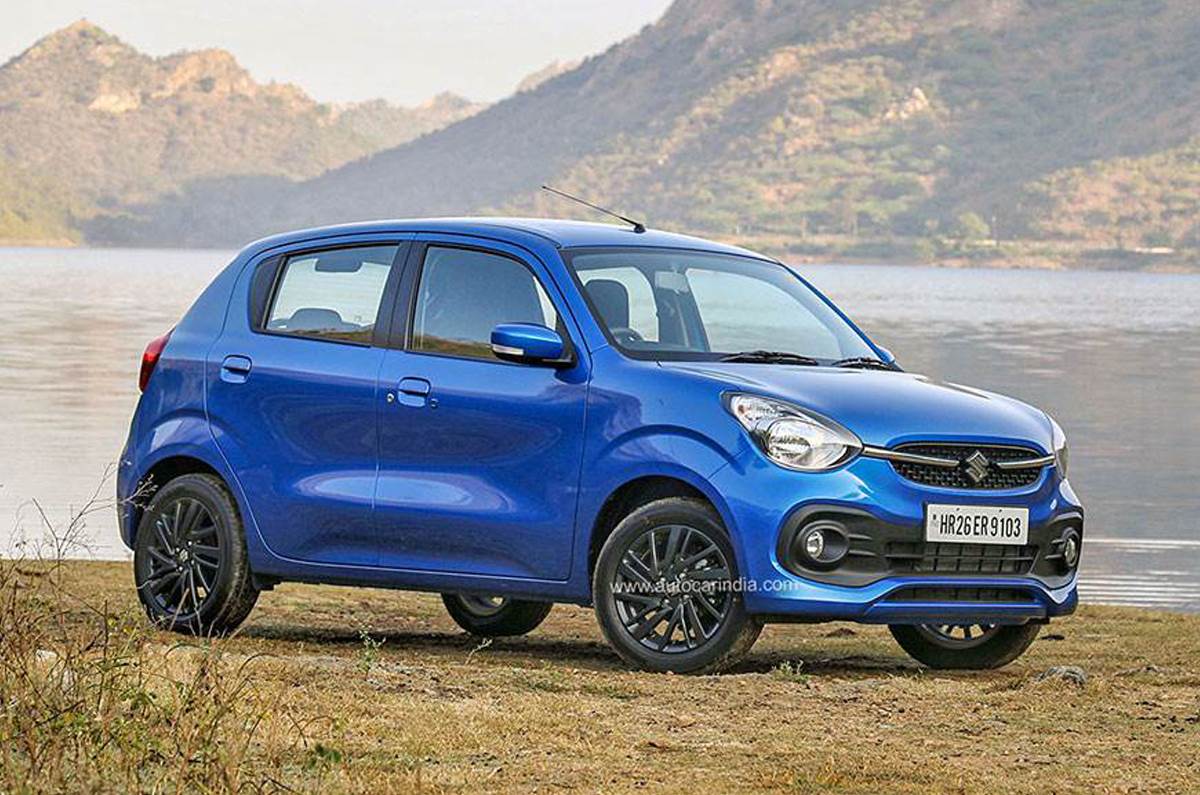 The newly launched Celerio CNG is currently the most fuel-efficient CNG vehicle in India. Powered by Maruti’s new 1.0-litre K10C DualJet engine, the Celerio CNG has a claimed fuel economy of 35.60km/kg. Thanks to two fuel injectors per cylinder, a higher compression ratio and a higher thermal efficiency, this new engine has already made the Celerio the most fuel-efficient petrol hatchback in the country, and the same is true for its CNG iteration as well.

Maruti offers the Celerio CNG only on the mid-spec VXi trim, which costs Rs 95,000 more than its petrol counterpart. In CNG-spec, the Celerio produces 57hp and 82.1Nm of peak torque, down 10hp and 6.9Nm from the petrol-powered car and is solely offered with a 5-speed manual gearbox. The Maruti Suzuki Celerio CNG is priced at Rs 6.58 lakh.

If you were to buy a CNG-powered vehicle, which would you pick? Let us know in the comments below.

Opinion: How much protectionism is too much?