A race weekend on TVS’ most hardcore one-make race bike gives us a brief, but lasting taste of the more serious end of the sport.

Lots of motorcyclists like to strip away the lights and mirrors from their bikes, throw on a race fairing and an exhaust system, and believe they have a race bike in their garage. But the truth is, a pukka race bike is far more removed from a road bike than that. As I found out when TVS gave me the opportunity to jump on its race-prepped Apache RR 310 for the final round of its One Make Championship.

Yes, this bike is also stripped away, and features race bodywork and a free-flowing exhaust system. But it goes so much further. We’re talking significant upgrades to engine internals and peripherals, considerably dropped clip-on handlebars and raised rearsets, nice sticky tyres, and no instrumentation of any kind. But perhaps the most impactful changes are the ridiculously quick throttle and the super sharp braking setup.

Even the quickest, fanciest litre-class superbikes need to be made idiot-proof, because in countries without a tiered licensing system, like India, almost anyone with the money can go out and buy one. So manufacturers equip them with electronic aids that make them almost impossible to crash, and soft throttle maps which won’t catch you out, and forgiving, modulable brakes that won’t bite you.

A race bike has neither the inclination nor the patience to offer you any of these, so my first lap out of the pits was a bit of a shock to the system. There’s probably 45 degrees of throttle twist, at most, between fully shut and wide open throttle. With all its modifications, this bike is producing around 46hp. While that’s over 30 percent higher than stock, in the grand scheme of things, it’s still not a huge number. But try sending it all at once to the rear wheel when leaned over, and it can be quite a handful, even with the safety net of the sticky TVS EurogripProtorqtyres. A few quick laps on this bike, and you’ll learn to be silky smooth and unerringly precise with the throttle, whether you like it or not.

It’s a similar story with the front brake, too. There’s tremendous bite and pinpoint modulation on offer, but all within about half an inch of lever travel. So powerful are the brakes and so grippy are the tyres on this race bike, that I found myself braking later than I had on smaller 200cc race machines, even though I was carrying far more speed down the straights.

But getting to this point was anything but easy. The problem wasn’t so much getting on the brakes as it was smoothly getting off them. A road bike allows you to smoothly and gradually release brake pressure as you begin to lean into a corner. A race bike will do that too, but with your inputs at the lever being so magnified, it’s much harder to get it right. Release just a few millimeters too many, too soon, and the front end will pogo up, sending you off-line. 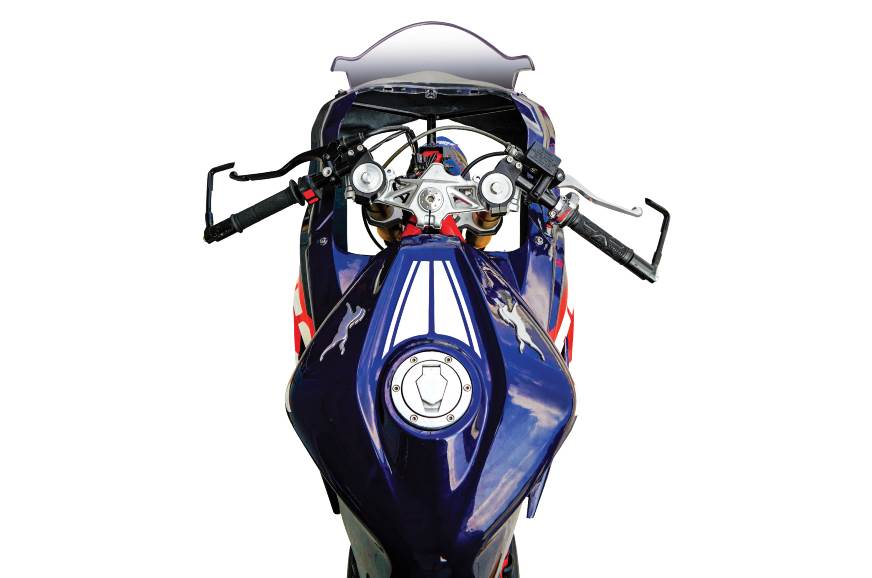 I understand the futility of telling you that a bike which calls the racetrack its home has razor sharp handling (the weight loss and ergonomic changes help here). But the hyper-reactive agility just further drove home the point that true-blue race bikes are purpose-built precision tools that take no prisoners. Understand its handling characteristics, and you can use the super quick turning to carve out some seriously quick lines around the racetrack, with minimal effort at the handlebars. But be careless with your inputs and the bike will express its unhappiness; not very subtly either.

The engine definitely feels like a big step up from the standard bike too, with a very meaty spread of torque across the rev range, and a notably strong top-end. The tradeoff is some pretty significant vibrations, the kind that make the first-gen RR 310 road bike seem like a polished and refined machine. But hey, a race bike has neither the inclination nor the patience to…

Almost exactly 12 months ago, I rode the Apache RTR 200 4V One Make Championship race bike at the same track and felt completely at ease on it. It required nothing out of the ordinary on my part, and perhaps that’s why that bike is used for the Novice category of the championship. Its modifications are far less extensive and so it more closely resembles the appearances and behaviour of a road bike. This RR 310 race bike lives in the Open category, reserved for the more seasoned racers. It demands a certain level of respect, fitness and ability to be ridden quickly, and most significantly, it required me to recalibrate myself as a rider. Challenging, for sure. Humbling too. But also an eye-opening experience, tons of condensed learning, extremely good fun, and super rewarding once I eventually got it right – the rewards being 6th and 7th place finishes in two thoroughly enjoyable, incredibly tiring races.

Facebook
Twitter
Pinterest
WhatsApp
Previous articleCrypto markets slip broadly this week; here’s how new tax rules impact investors
Next articleOpinion: How much protectionism is too much?

Opinion: How much protectionism is too much?